In general, amplicon sequencing method is faster, easier and cheaper than hybridization-based alternatives and so more suited for quick gene panel testing and production-scale applications such as clinical diagnostics and industrial genomic screening. Amplicon sequencing also allows for dealing with low DNA input which is difficult for hybrid captured based technology. For example, when dealing with viral detection, amplicon sequencing has a clear advantage against hybrid capture based methods in terms of detection sensitivity and DNA/RNA input requirements.

On the other hand, hybrid capture-based method can interrogate very large target region up to human whole exome and is generally better at detecting structural variations such as novel gene fusions, etc., so it is more suitable for research and discovery projects. However, capture-based methods suffer from low on-target rate for smaller panels due to the inherent lower specificity and sensitivity of hybridization probes. Due to the above reasons, scientists and clinicians tend to employ multiplex PCR for small-mid sized (less than 1Mb target region) panels for the detection of single nucleotide polymorphisms (SNPs) and/or small insertions/deletions and hybrid capture for large (0.5Mb – 50Mb target region) panels for the detection of SNPs, fusion genes, copy number variations (CNV), etc.

Below is a comparison of amplicon sequencing and hybrid capture-based target enrichment workflows. 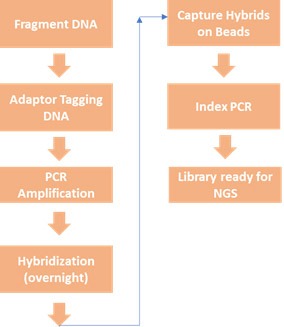 Below is a summary of the pros and cons of both methods.

Note: Some comments on amplicon sequencing methods do not apply to Paragon Genomics’ CleanPlex technology as it overcomes many of the key drawbacks of traditional amplicon-based methods. This will be discussed in the next section.

First, the target regions of a genome or DNA sample are amplified by well-designed multiplex PCR primers with overhanging tails being partial adaptor sequences compatible with corresponding DNA sequencers, resulting in both target amplicons and non-specific PCR products including primer dimers.

Traditionally, when the panel size is large (e.g. more than 2,000 amplicons in a single pool), the non-specific PCR products can be overwhelming and significantly affect the downstream steps if there is no measure to remove them. Some amplicon-based methods utilize bead purification and size selection to remove smaller DNA fragments such as primer dimers. However, some complicated non-specific PCR products with sizes similar to the lengths of target amplicons and its resulting libraries can be difficult to remove using just size selection. The following Bioanalyzer trace shows significant background noise around a target library of 300bp.

Subsequently, sample barcodes (for sample pooling purpose) are added by an indexing PCR step to get sequencing-ready libraries. The whole workflow only takes 3 hours and minimal hands-on time.

Due to its background cleaning technology, CleanPlex can easily break the panel size limit of traditional multiplex PCR and amplify more than 20,000 targets in a single panel. The following amplification plot shows the GC% of each target amplicon vs. its sequencing depth for a 27,000-amplicon panel.

The figure below compares CleanPlex and another well-known amplicon-based method in terms of GC bias and amplification uniformity. Two panels target the same regions of a few cancer-related genes. The competitor method obviously has GC bias around low GC region and an overall low amplification uniformity across the spectrum of the panel. On the contrary, CleanPlex can amplify all target regions evenly. The result of this is that users of the competitor’s panel have to raise the average sequencing depth by 100% to achieve similar variant calling quality, therefore doubling the sequencing depth and cost.

Pushing the limit of LOD

Use less input and resources to reduce costs

Have specific requests or questions? Schedule a free consultation with our PhD-level expert scientists to learn how our best-in-class amplicon sequencing custom panel design services can help you advance your work.

Explore ready-to-use panels for for OmniFusionTM

Explore ready-to-use panels for for AccuFusionTM

Detect variants with high confidence in low-input and challenging samples

What is amplicon sequencing?

Amplicon sequencing is a method of targeted next generation sequencing (NGS) that enables researchers to analyze genetic variation in specific genomic regions.
Amplicons are DNA fragments of a polymerase chain reaction (PCR). The term amplicon is often used interchangeably with PCR product. By creating amplicons
and thus increasing the number of copies or a certain DNA region of interest, you allow for higher signals during sequencing, which in turn allows for more
confident sequences.

Due to its many uses, the sequencing of amplicons can be successfully applied to a variety of disciplines like nutrition, bacterial metagenomics, gene editing and clinical research.

How does amplicon sequencing work?

In amplicon sequencing, amplicons are generated by PCR, pooled and subsequently sequenced. Amplicons from different samples can be multiplexed, also called indexed or pooled, which involves adding a barcode (index) to samples so they can be identified. Before multiplexing, individual samples used for amplicon sequencing must be transformed into libraries by adding adapters and enriching target regions via PCR amplification. The adapters allow formation of indexed amplicons which then allow the amplicons to be sequenced together but
ultimately demultiplexed for downstream analysis.

What is DNA sequencing and how does it work?

DNA stands for DeoxyriboNucleic Acid and it contains the genetic information for each organism to help them grow, function, and reproduce. The genetic code is made up of four nucleotides that organize themselves linearly. These four nucleotides are Thymine (T), Cytosine (C), Guanine (G), and Adenine (A).

DNA sequencing is the process of determining the nucleic acid sequence – the order of nucleotides in DNA. It includes any method or technology that is used to determine the order of these four bases: A, T, G and C. In the DNA double helix, the four chemical bases always bond with the same partner to form “base pairs” A always pairs with T; C always pairs with G.

In recent decades there have been significant advancements in the technology available for DNA sequencing. Broadly, there are two types of DNA sequencing:
shotgun and high-throughput. Shotgun (Sanger) sequencing is the more traditional approach, which is designed for sequencing entire chromosomes or long DNA strands with more than 1000 base pairs. It involves a rapidly expanding firing pattern to read the DNA in short fragments of 100 to 1000 base pairs, which are then overlapped with a computed analysis system.

High-throughput is the next-generation sequencing (NGS) method of DNA sequencing, which has led to the rapid acceleration of DNA sequencing and broadened knowledge in the field. It is able to produce thousands of sequences simultaneously, which lowers the cost of the technique significantly.

New methods are still under development, including some that utilize nanopores to sequence the DNA. This would work by threading single strands of DNA through nanopores in the cell membrane, which would then be read by the technology in single file.

What are the benefits of genome sequencing?

DNA sequencing may be used to determine the sequence of individual genes, larger genetic regions, full chromosomes, or entire genomes of any organism.

This information is useful for researchers in understanding the type of genetic information that is carried in the DNA, which may affect its function in the body.

The human genome contains about 3 billion base pairs that spell out the instructions for making and maintaining a human being.

Applications such as whole genome sequencing or WGS allows complete coverage of the entire genomic material. This is in contrast to targeted sequencing where
only specific regions of interest are sequenced.

Sequencing is the procedure of determining the order of nucleotides in a DNA section comprising a gene. Next-generation sequencing is a technology for determining the sequence of DNA or RNA to study genetic variation associated with diseases or other biological phenomena.

This method was initially called “massively parallel sequencing”, because it enabled the sequencing of many DNA strands at the same time, instead of one at a time as with traditional Sanger sequencing by capillary electrophoresis.