How much DNA should I use to detect 1% somatic variant frequency?

Lower DNA input will generally increase the possibility of inaccurate calling of variant frequencies. As shown in the following figure on the left, when less and less DNA was amplified with CleanPlex™ OncoZoom Panel, increasingly larger variations were observed for calling alternative alleles at 50% frequency, even though the uniformity may not deteriorate significantly (figure below on the right). Therefore, we recommend using higher amounts of DNA for somatic variant detection. This is especially true when DNA quality is uncertain (such as DNA from FFPE tissues and liquid biopsy). Theoretically, 10 ng human DNA (~1500 cells and ~3000 copies of each locus) will allow detection of 30 somatic alternative alleles at 1% frequency. With CleanPlex® technology, lower amount (even less than 1 ng) of high-quality genomic DNA may be used for detection of germline alterations. 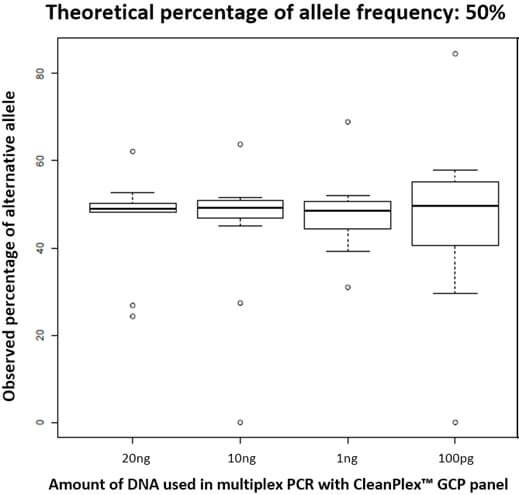